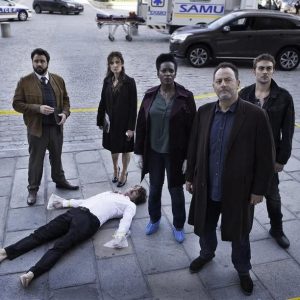 Bryant & May and The Memory of Blood by Christopher Fowler 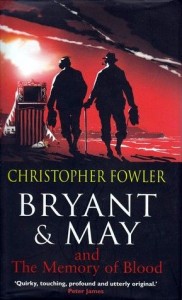 BRYANT & MAY AND THE MEMORY OF BLOOD is the ninth book about Arthur Bryant, John May and their Peculiar Crimes Unit of the Metropolitan Police.

BRYANT & MAY AND THE MEMORY OF BLOOD begins with some scene setting chapters to settle new readers in before the first murder occurs – Robert Kramer, ruthless property developer turned theatre impresario, is throwing a party in his new penthouse just off Trafalgar Square (London is effectively a character in Bryant & May novels and undoubtedly Christopher Fowler is strong on characterisation). The air at the party is uncomfortable and full of foreboding and when Kramer’s young wife checks on their baby boy, she finds the nursery door locked from the inside. When the door is broken open, the Kramers are faced with an open window, an empty cot, and a grotesque antique puppet of Mr Punch lying on the floor.

This is another strong Bryant & May novel from Christopher Fowler with the usual intricate plot full of both twists and turns and strong characters who are nine-tenths believable and one-tenth fantastical.

For the benefit of new readers, the author does include a short briefing report on the members of the Peculiar Crimes Unit and the history of the unit at the start of the novel but other reviews I have seen by newcomers to the series suggest that this (perhaps more than others) can be enjoyed without having read the rest of the series.

One question that might occur to the prospective reader is how Christopher Fowler compares in an increasingly crowded field of fantasy detective stories such as Jasper Ffordes Thursday Next novels and Ben Aaronovitchs Grant and Nightingale novels (also working for the Metropolitan Police in the Economic and Specialist Crime Unit). The answer, I think, is still very well.

This is a not a new field with fantasy having been mixed with private eyes (e.g. Tanya Huffs Vicki Nelson, Mike Resnick’s John Justin Mallory and Malcolm Prices Louie Knight) and police procedurals (e.g. Terry Pratchetts Samuel Vimes) in recent years whilst the notion of occult detectives has been around since the late nineteenth century such as with William Hope Hodgson’s Carnacki, the Ghost Finder from 1910 onwards.

Bryant, May and the Peculiar Crimes Unit will return in BRYANT & MAY AND THE INVISIBLE CODE which the author describes as having “a plot that operates both as a single case, but completes an arc that has been continuing for the last four books, taking it to a new point in the story.” My preorder is already in for holiday reading next summer.

Not Dead Yet by Peter James

NOT DEAD YET is the eighth in the series of Detective Superintendent Roy Grace novels by Peter James and follows on from the events of DEAD MAN’S GRIP for Roy Grace and his team.

The worlds of Tinseltown and Brighton clash as a movie adaption of the relationship between King George IV and Maria Fitzherbert hits town.

This is a make or break project for LA producer Larry Brooker who is on the verge of insolvency.

This could be the project that enables Gaia to make the shift from rock superstar to serious actress.

The City of Brighton and Hove relishes the publicity value of a major Hollywood movie being filmed on location there which could be incalculable for tourist revenue and attracting future films.

For Gaias number one fan, it is the chance to cement their relationship.

These events collide to become a nightmare for Detective Superintendent Roy Grace when an attempt on the life of Gaia is made days before she leaves her Bel Air home to fly to Brighton (her home town) so he has to juggle the hunt for a potential obsessed stalker in his city with an ongoing murder investigation with very few leads and the continuing pregnancy complications of his girlfriend, Cleo.

Also the significant figure from his past is now getting much closer to home.

This is crime fiction for those who like to have well-rounded detectives with a believable private life.

One question which immediately springs to mind is who is Gaia based upon – Peter James did confirm in an interview on BBC Breakfast that he saw Gaia as a cross between Madonna and Lady Gaga  (still online at the moment at http://www.bbc.co.uk/programmes/p00vb9b1 – at least in the UK)

The short snappy chapters that are a Peter James trademark (127 chapters in 560 pages in the hardback edition) are still there so you find it hard to put it down – you do tend to think I have time for just one more chapter.

The slight hint of unrealism is still there especially in the significant figure from his past who I do hope is brought to the fore in the next book as that back story is starting to drag on quite a bit.

Once again I would say that it is a very good read that engages you from the first page and I, for one, am looking forward to the next novel in the series – I would stress that it is becoming more the case that you will appreciate it much more if you read the series in sequence. 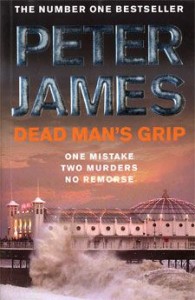 The Killing Pool by Keith Sampson 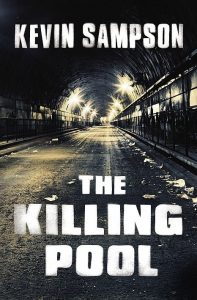 A headless corpse is discovered by Detective Chief Inspector Billy McCartney in scrubland close to Liverpool docks with the body looking like a gangland hit. A mile away, a dazed and confused girl staggers into a run-down bar where the owner, a career criminal called Shakespeare, cannot get a word out of her.

The body was that of Kalan Rozaki, youngest brother of a notorious crime family but he was the white sheep in the family. For almost a year his brothers have been under full-time Drug Squad surveillance as DCI McCartney slowly closed the net on their heroin trafficking – his chief informant was someone who had insider knowledge of the Rozaki clan’s operation … their newly deceased baby brother, Kalan.

His investigation starts to solve not only this crime but another unsolved drug crime of nearly 30 years ago.

I have to admit that I found this one a struggle to get through. There is a very competent police procedural hidden within here but the structure of multiple viewpoints which you shift from sometimes on a pagely basis in the initial pages makes it very difficult to keep track of the narrative unless you are really concentrating – it is not a commute read.

I might be tempted by the next one as this is described as the first in a series but I would like to read a few reviews first.