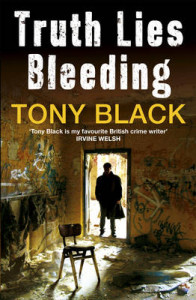 TRUTH LIES BLEEDING is the first book about Detective Inspector Rob Brennan from Tony Black who is best known for his Gus Dury novels.

Rob Brennan is a Detective Inspector in Edinburgh who is returning from psychiatric leave after the shooting of his younger brother. He returns to work to face a hostile Chief Superintendent who is up for promotion and wants everything to be very smooth until she has her interview – this is a problem with the discovery by four teenagers, of the mutilated body of a teenager in a dumpster in Muirhouse, with the only other Detective Inspector tied up on another case. Initially she wants to leave the case in the hands of Detective Constable Stevie McGuire but Brennan persuades her that the best thing for him is to get involved in a case straight away. Brennan asserts his authority over McGuire straight away by getting him to return to the incident room and gets a uniformed office to drive him out to the crime scene.

The murdered girl turns out to be a teenage runaway who is very far from home and had a baby with her – a fact that her Presbyterian minister father is trying very hard to hush up.

At first glance you might feel that this is a fairly standard piece of Tartan Noir, but Tony Black is a very skilled writer who can depict the grim, darker aspects of life with realism and yet still be highly readable. The switching of narrative viewpoint between the pursuer and the pursued works well here – it doesn’t always. My only real issue with this book is that, for me, the multiple sub-plots didn’t quite gel together and some get tidied up very quickly at the end; perchance, they will be dealt with in more depth in another book.

Would I pick up a second Rob Brennan? Yes, I would.